I have reported on the washed-out section of SH 87 three times in the past, including 2001, January 2005 (when it was possible to drive the entire length in a passenger vehicle) and November 2005.

Now that I have a Suburu Forester purchased in December 2013, I decided to go back to SH 87 and try to drive the full length. I started on the Port Arthur (east) end. There is plenty of evidence of the washed-out road, as the photos below show. But I did not get far.

After about two miles there were two locations that were difficult for the Forester to get through and would have been impossible for a conventional passenger vehicle. At three miles there was an area of soft sandpiles and high grass. I might have been able to get through in the Forester, but it was risky and I would have surely scraped the bottom of the vehicle. There was no way to know how difficult conditions were ahead, and if I had to turn around I would have to get through the dangerous location again. So that was the end of the road for me.

A fully off-road capable jeep could surely have made it through the spot that stopped me. But there was really no evidence that vehicles had passed through the area. There were no tire marks or makeshift trail, which leads me to believe no one is driving this section of the coast and the road ahead may have been unsuitable even for jeeps. 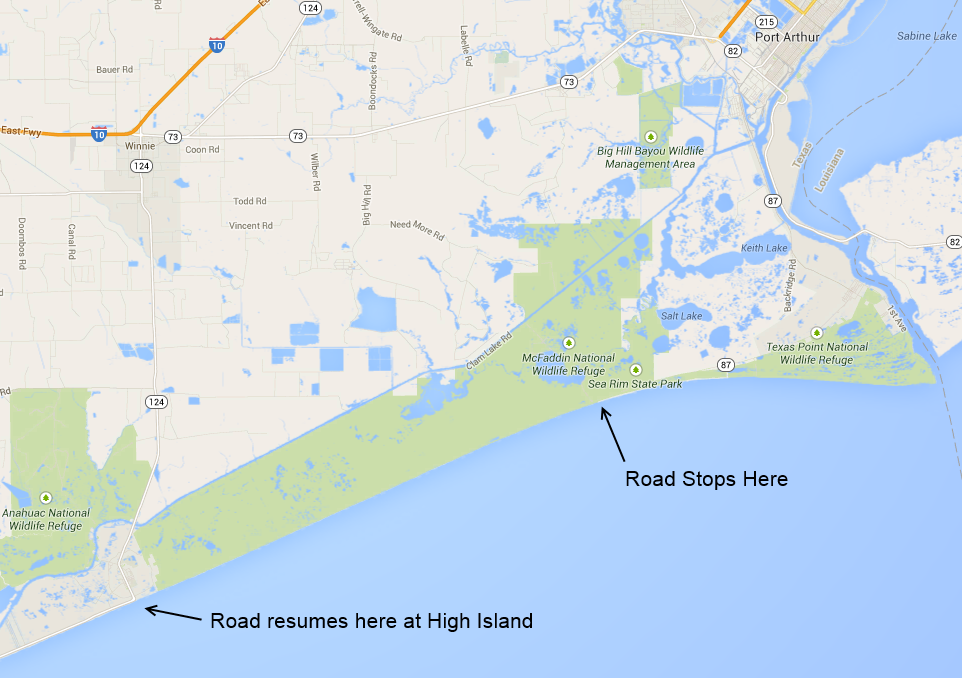 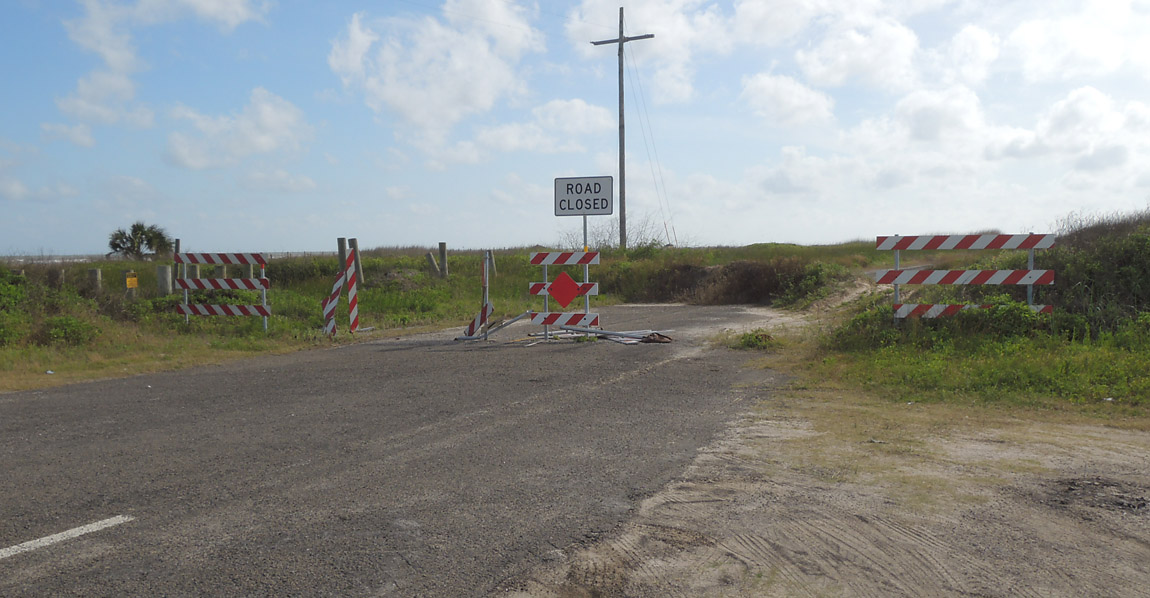 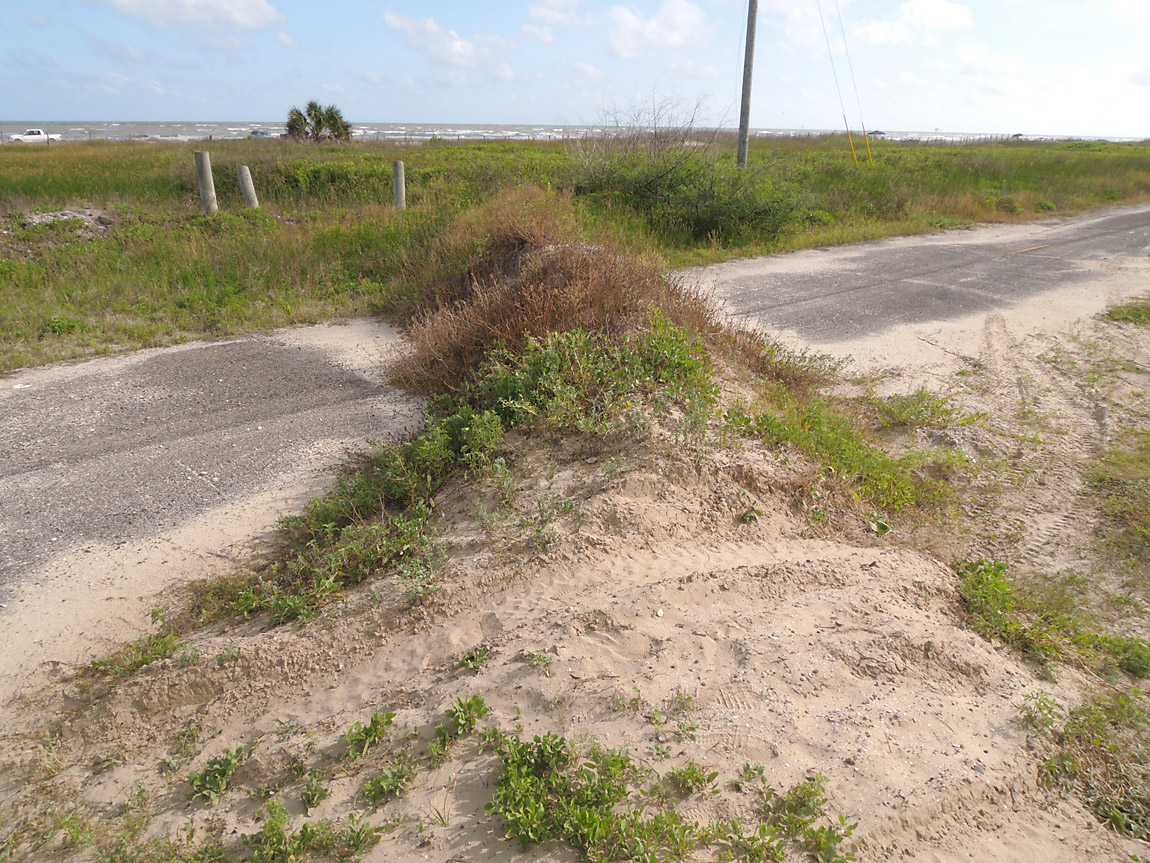 (17-May-2014) There is a sand berm across the road and some vehicles have crossed over it in the foreground. But vehicles continuing west should go to the beach. The beach entrance was about 200 meters east. 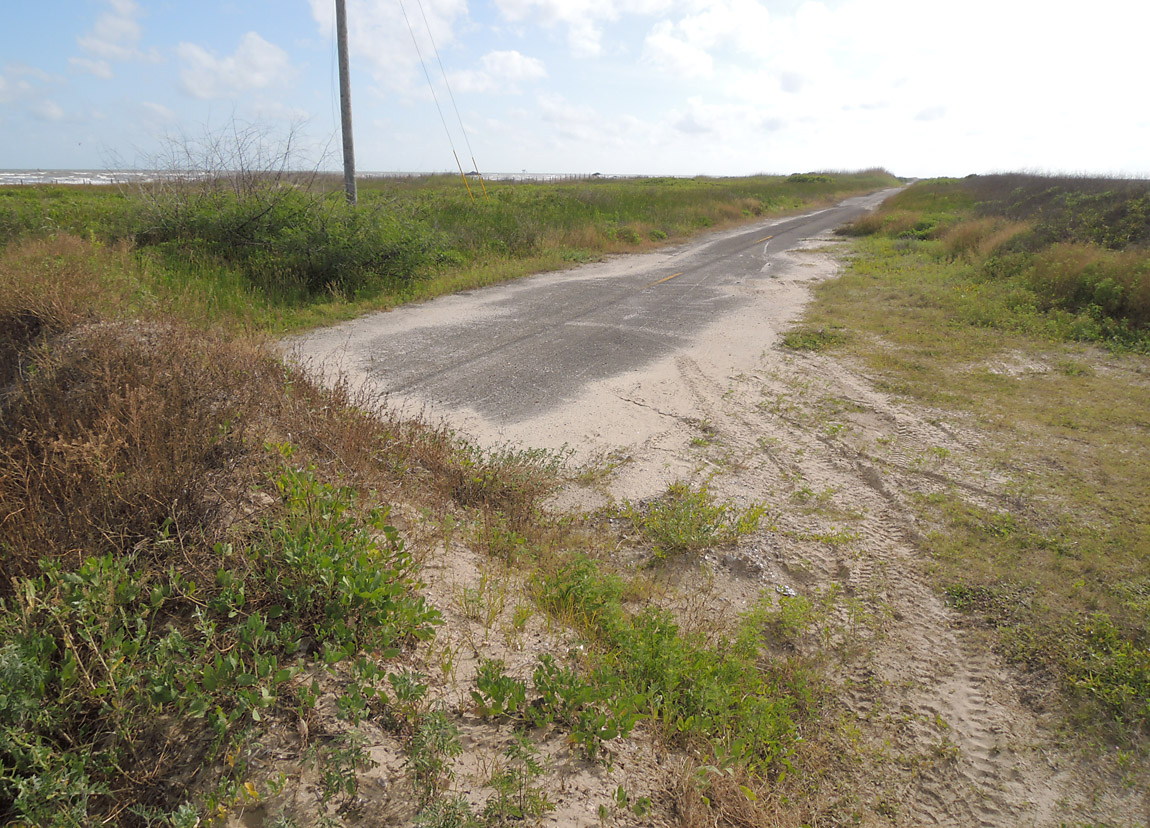 (17-May-2014) Looking west at the abandoned road, still intact at this location. 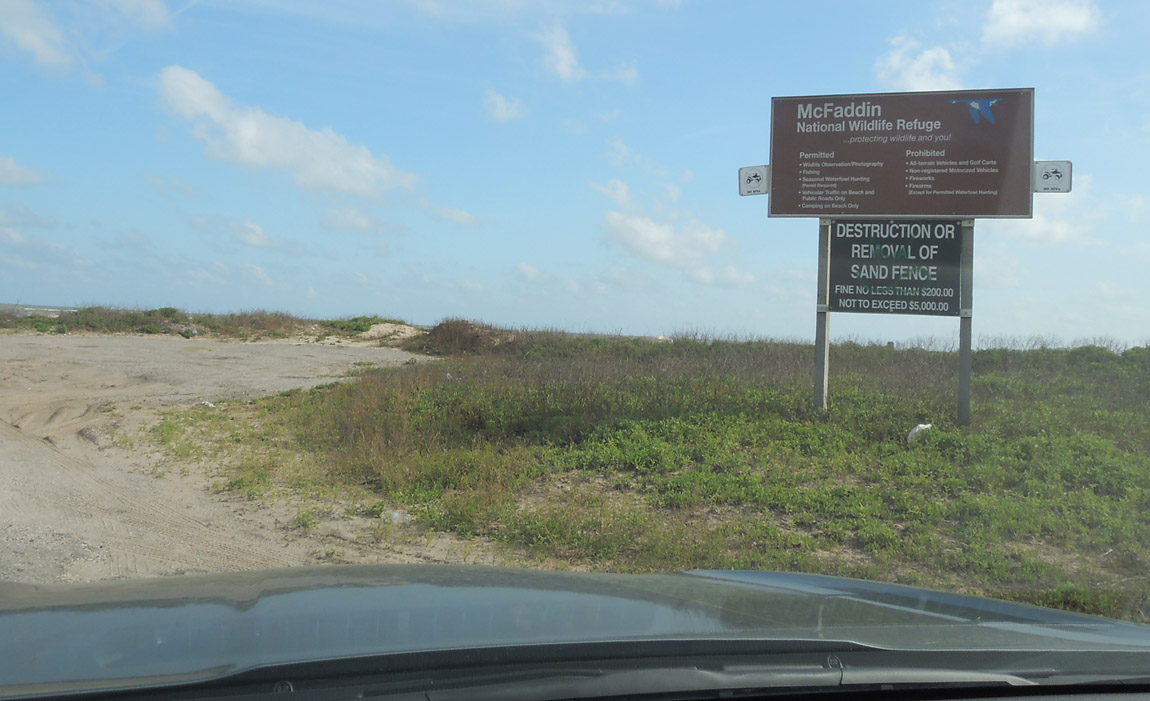 (17-May-2014) This is the beach entrance just east of the end of the road. The area to the west is the McFaddin National Wildlife Refuge. 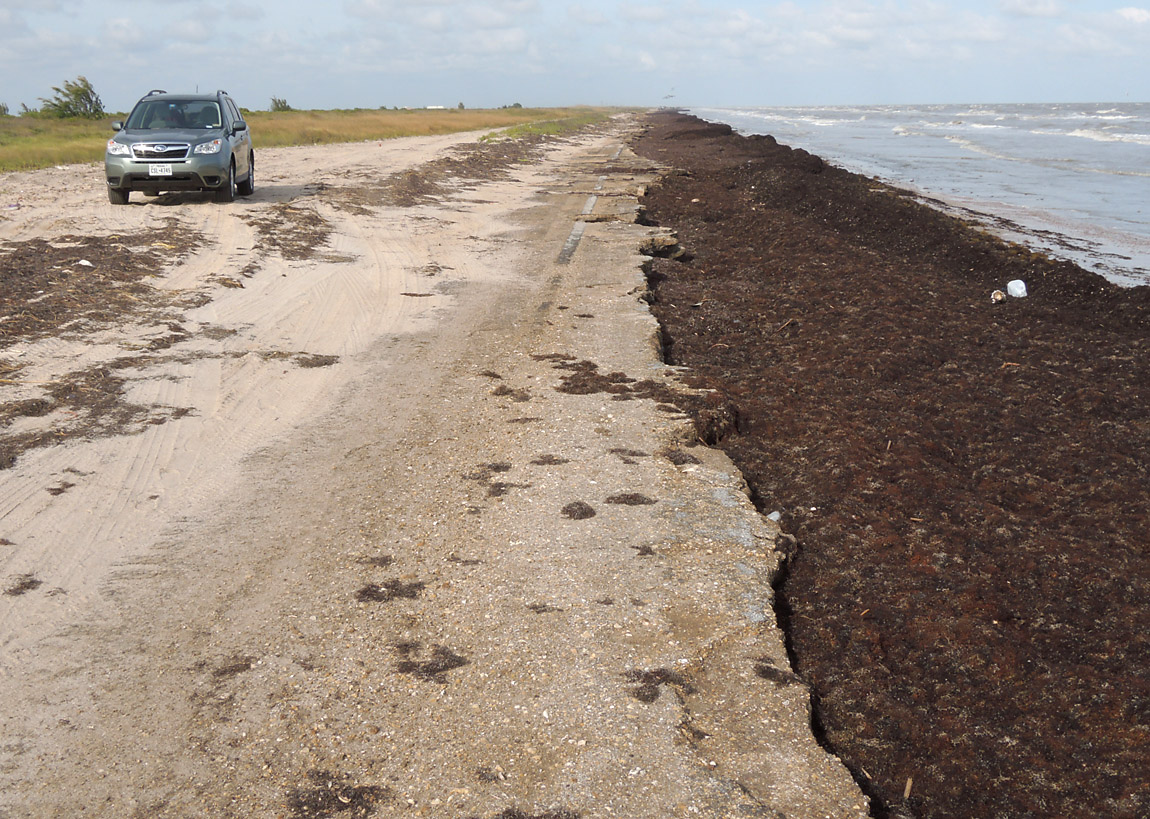 (17-May-2014) Here is the first area where the abandoned highway is destroyed. The beach was covered with a thick layer of seaweed. The beach in this area is normally covered with garbage, so the seaweed provided a more natural look. 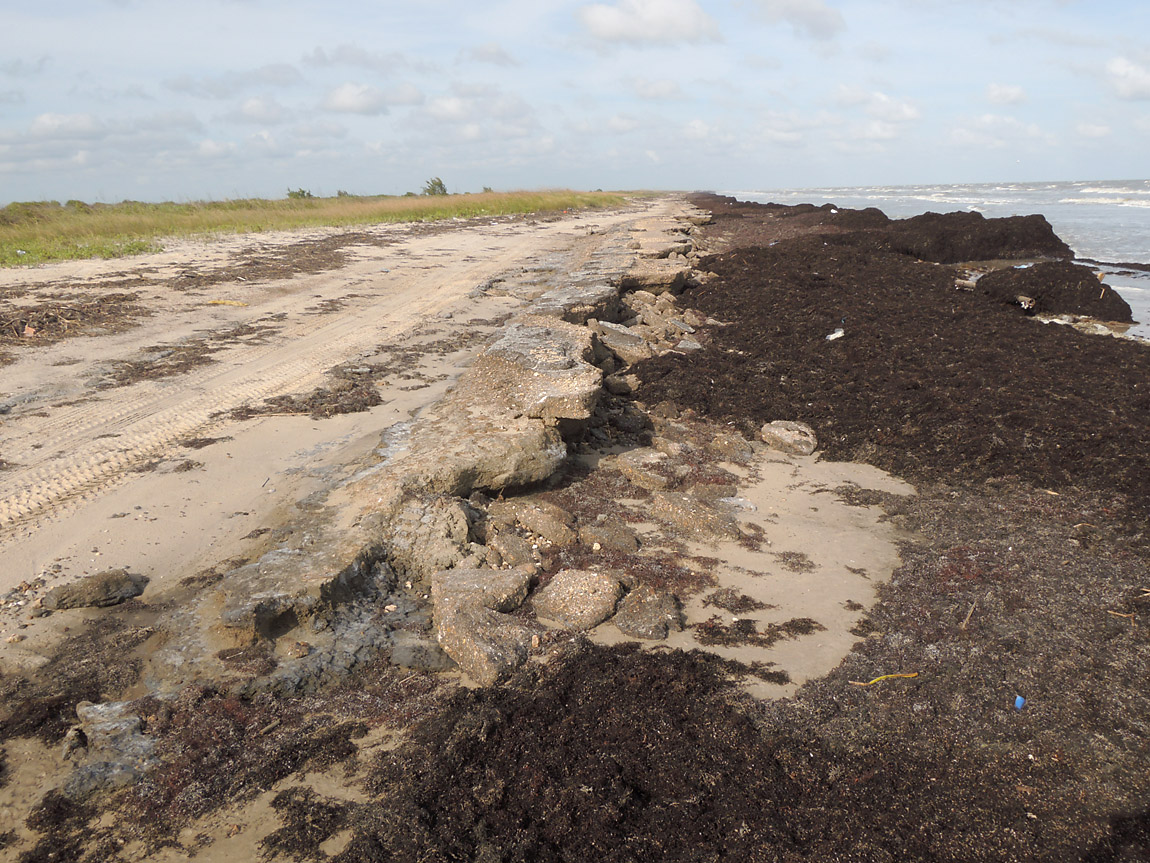 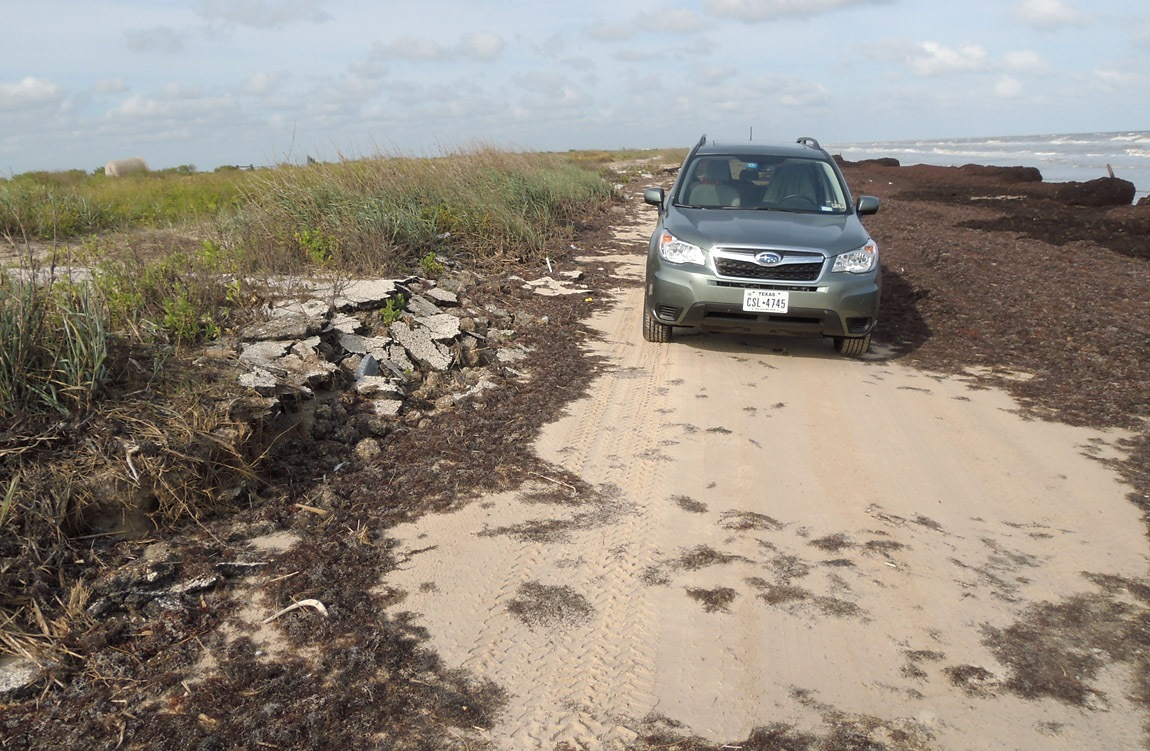 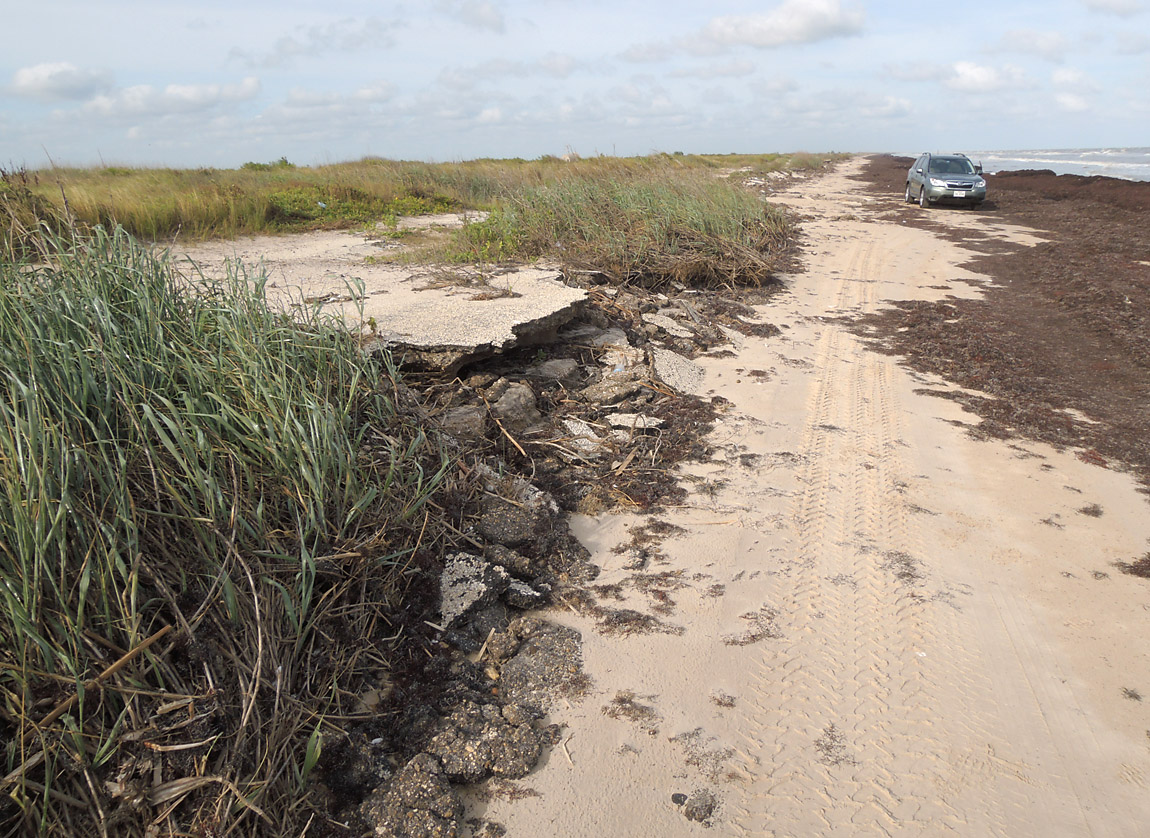 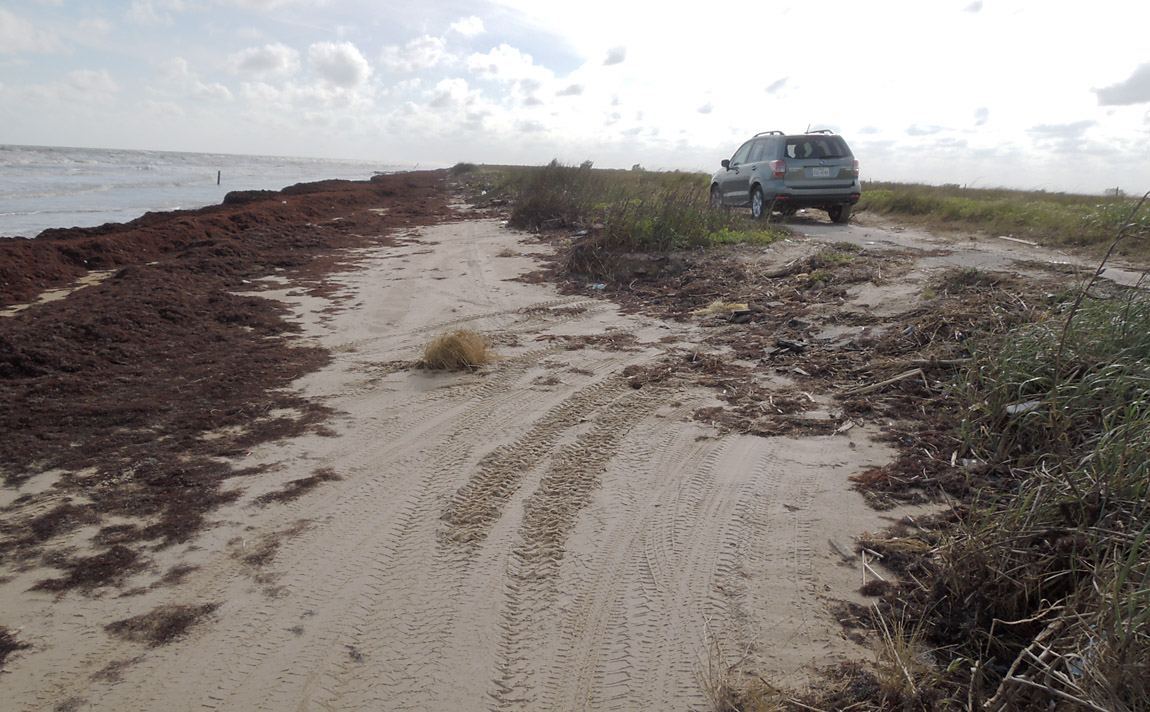 (17-May-2014) Here the makeshift vehicle trail switches from the beach onto the old roadbed to avoid an area of thick seaweed ahead. 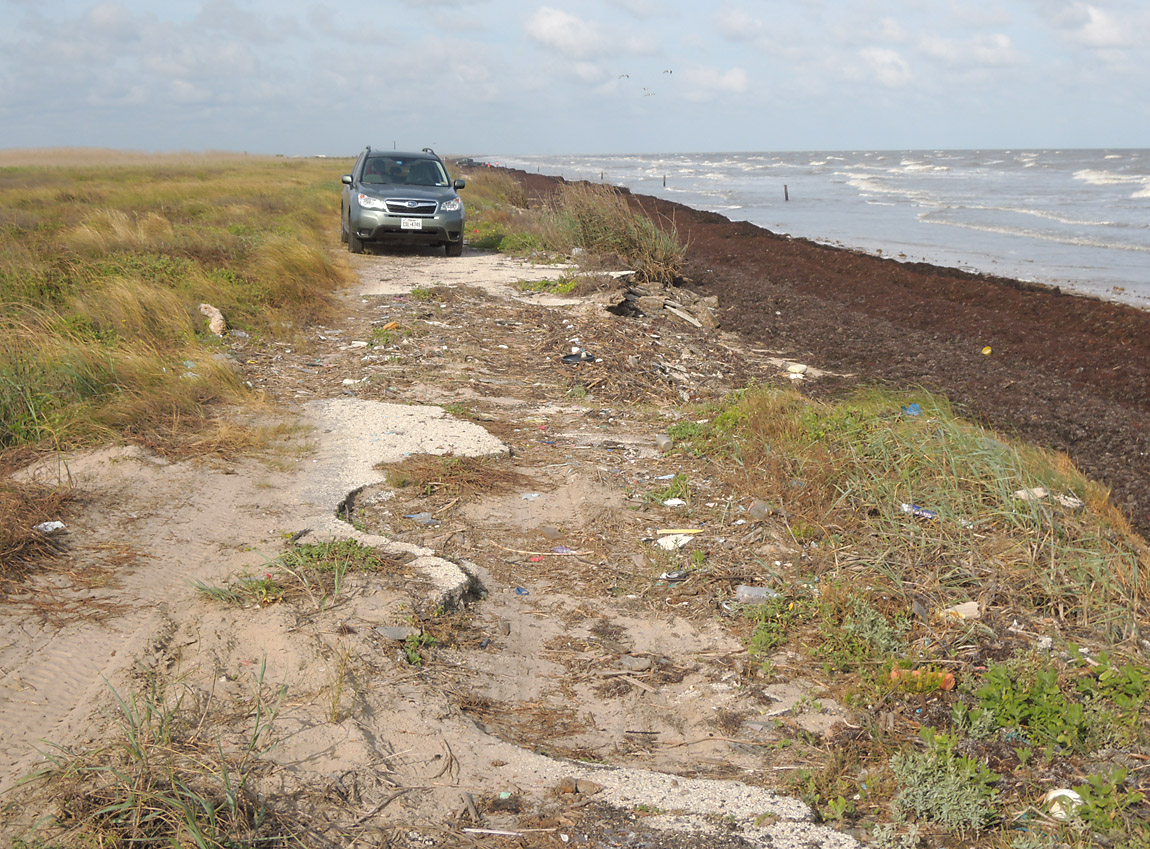 High Resolution (17-May-2014) Driving conditions start to deteriorate at this point. 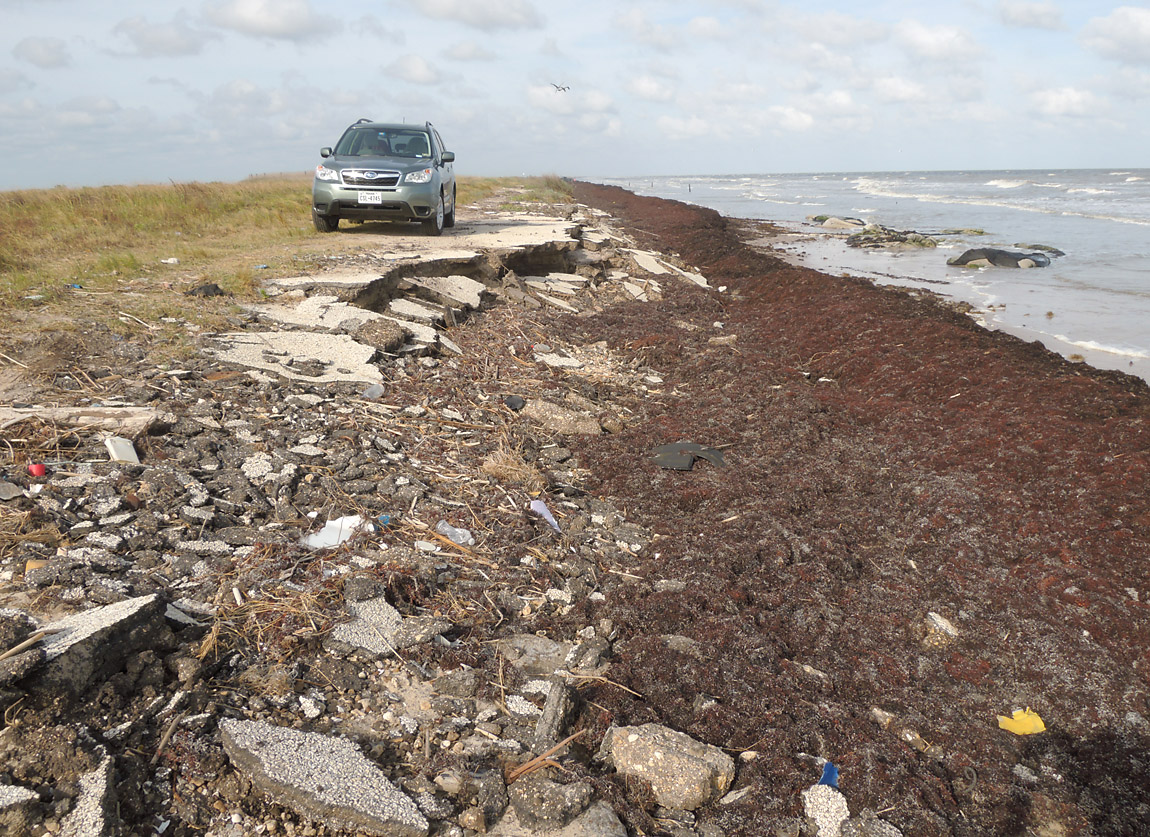 High Resolution (17-May-2014) The best photo in this collection. 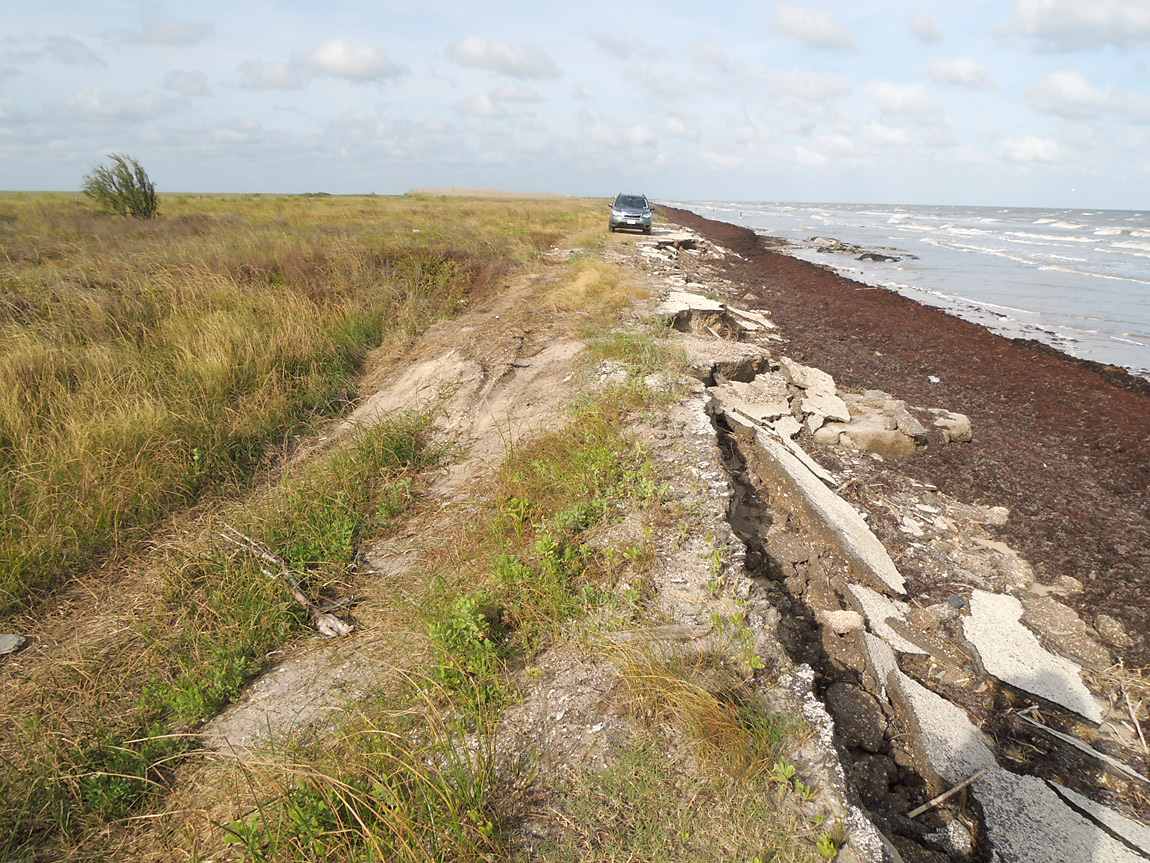 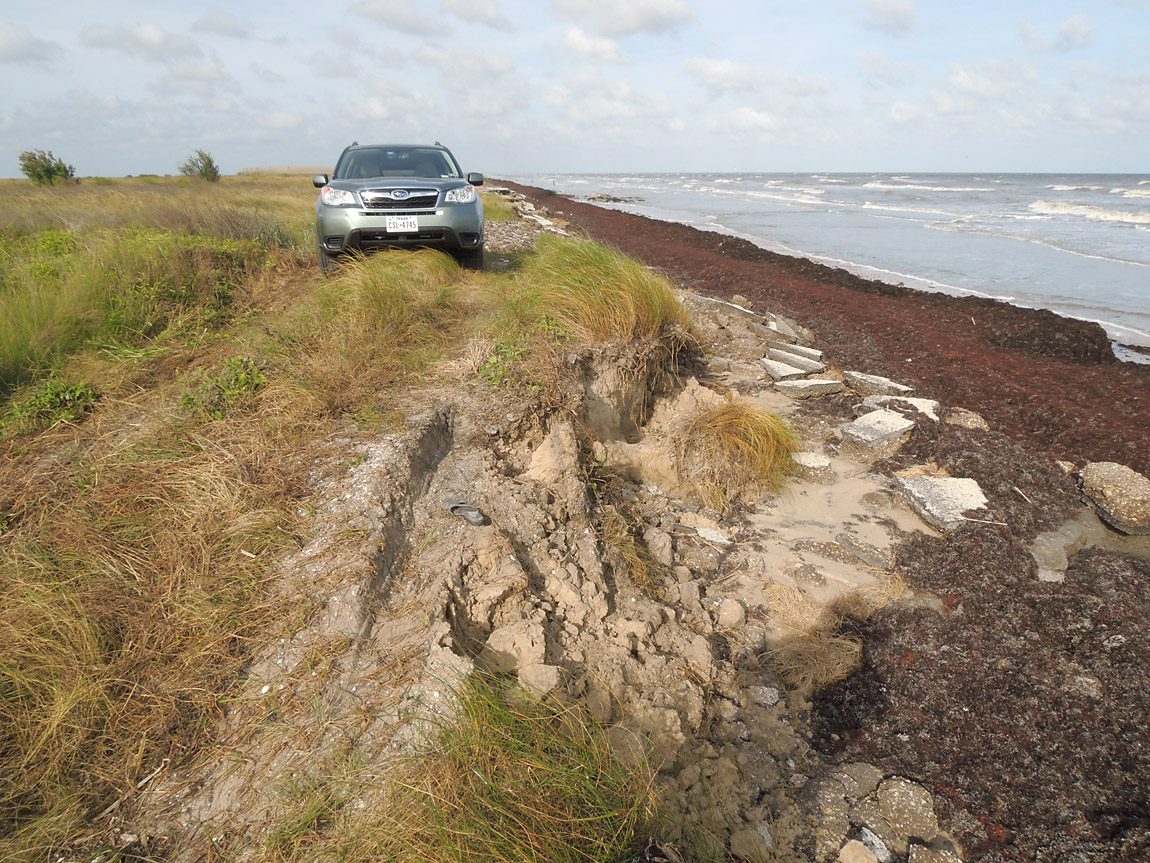 (17-May-2014) The next difficult spot. After an inspection of the road ahead I determined I could make it through, but the vehicle tilted heavily to one side. 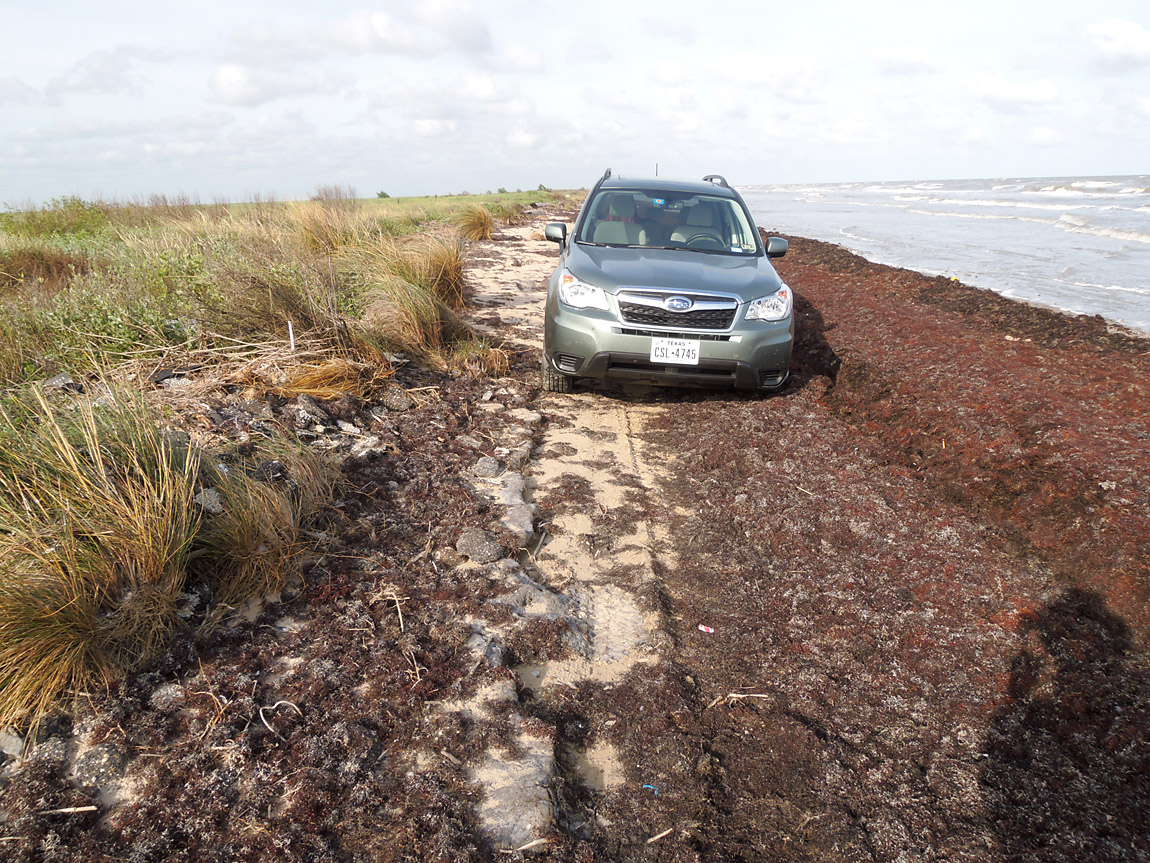 (17-May-2014) It became necessary to drive through the seaweed, which was very thick and spongy. It was fine as long as the ground below was firm, but you never really knew what was under the seaweed. 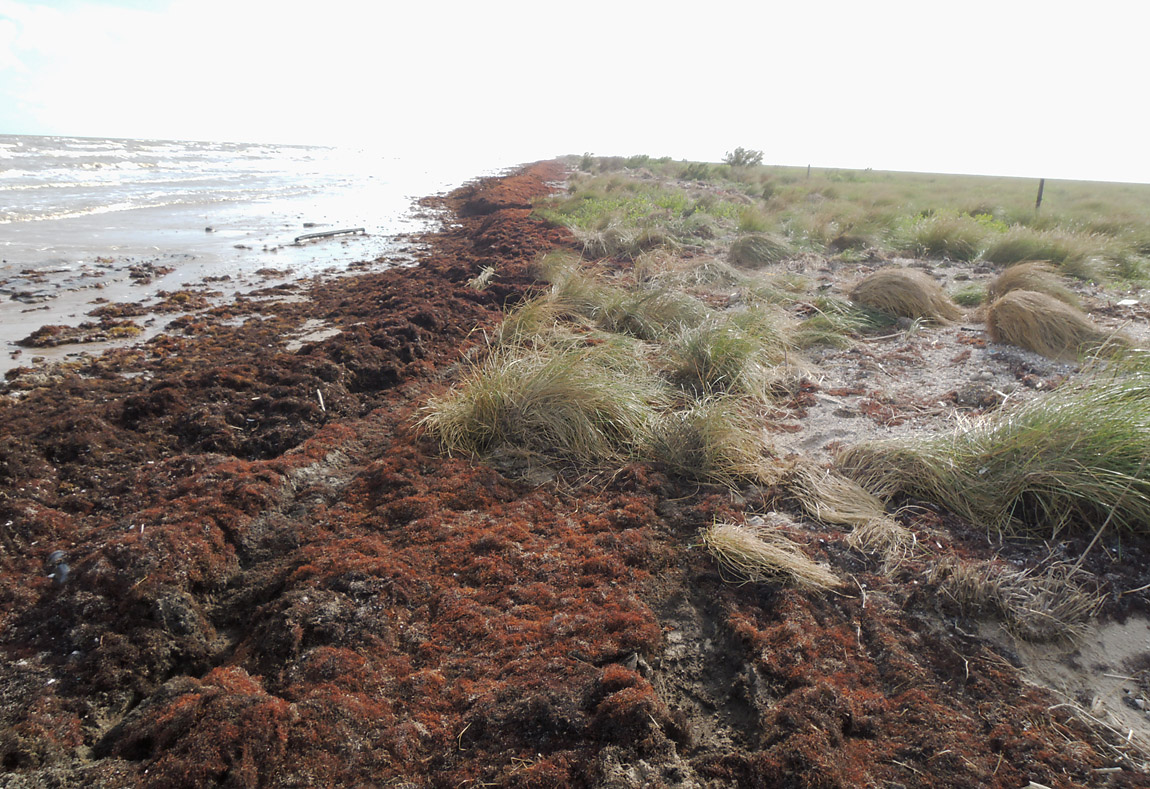 (17-May-2014) THE END OF THE ROAD FOR ME. On the right the ground had a lot of soft sandy-mix mounds of dirt with grass clumps. I may have been able to make it through, but I would have sunk into the soft sand and surely scraped the bottom of the vehicle. The other option was to drive in the water. It was probably doable, but was not really an option in my six-month-old vehicle. 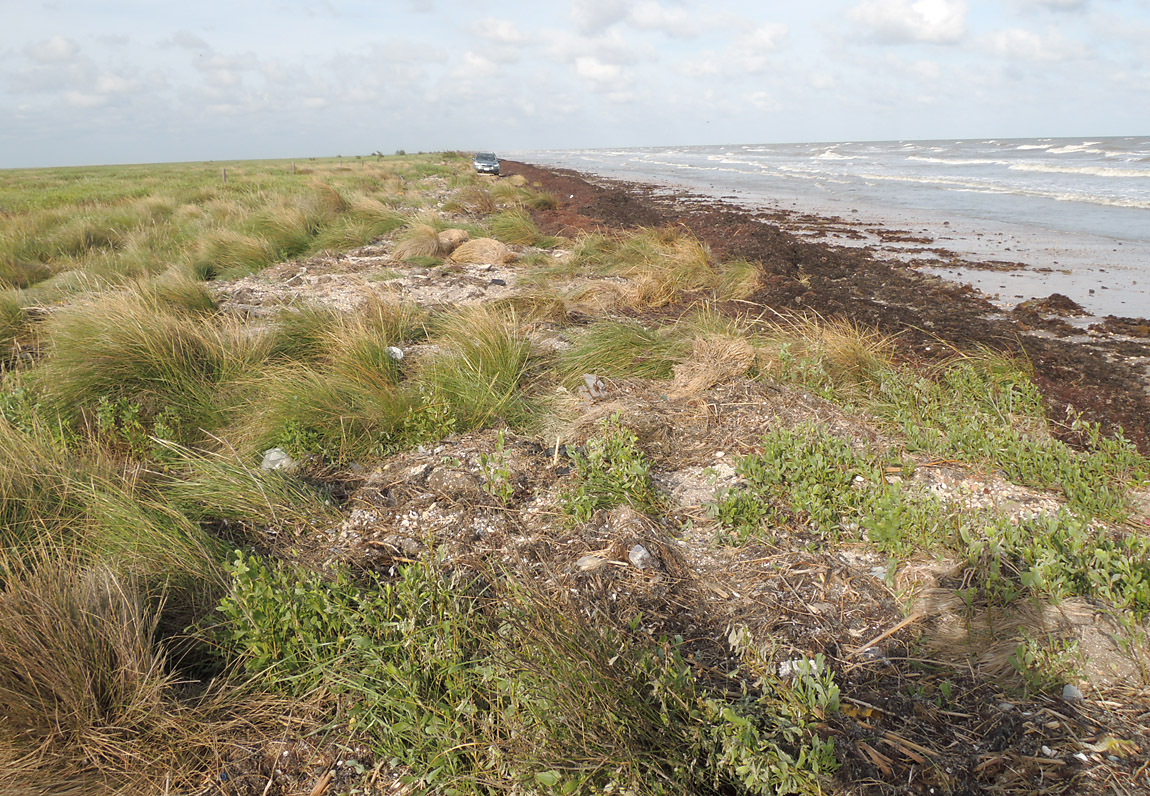 (17-May-2014) Here is another view of the area I would have to cross. This area looked like it had been restored by the wildlife refuge. There was no evidence of a vehicle trail. 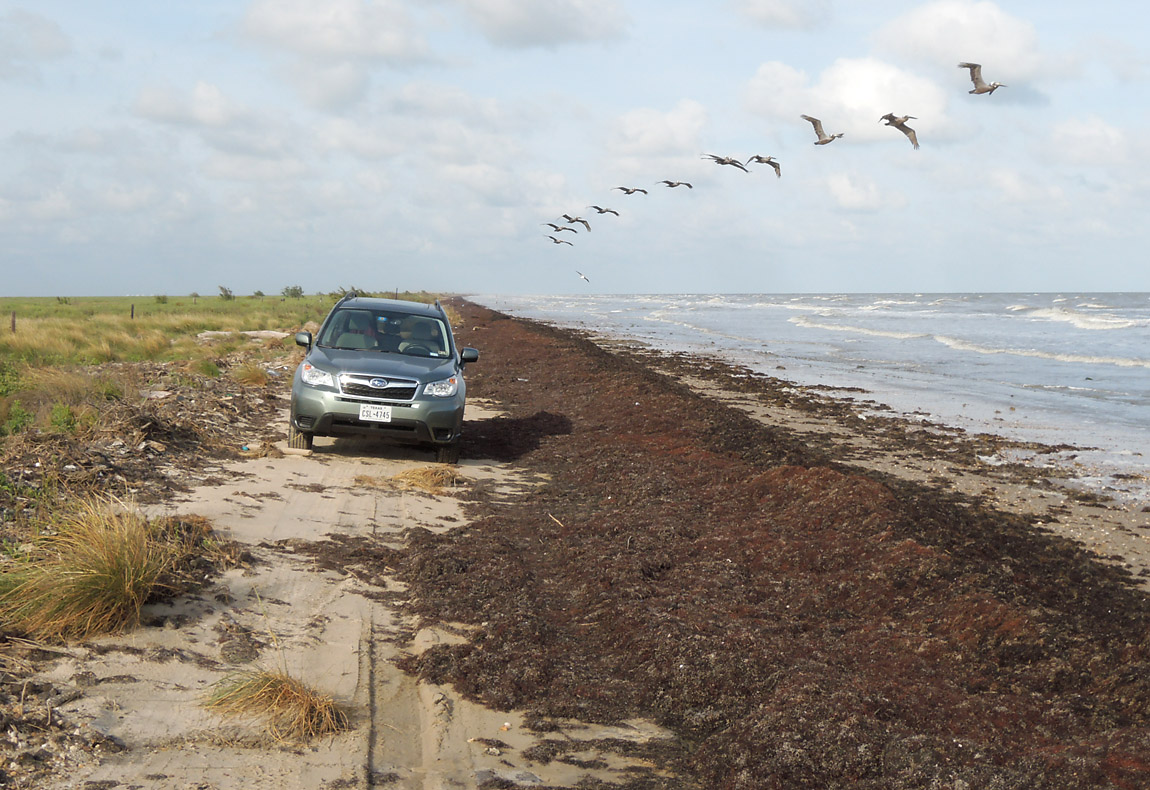 (17-May-2014) A flock of pelicans flew by before I turned around to go back to Port Arthur.