These photos were taken by a member of the Prakla Geophysical team which was acquiring seismic data in the nearby Libyan desert in 1961. Numerous employees of Prakla drove Land Rovers to Waw An Namus for this visit.

Looking at modern aerial views of the oasis on Google Maps and other views available online, it appears that Waw An Namus remains virtually in its fully natural state in 2015. However, some changes in the ponds are evident since 1961. Two small ponds have become dry, and one new pond has formed. 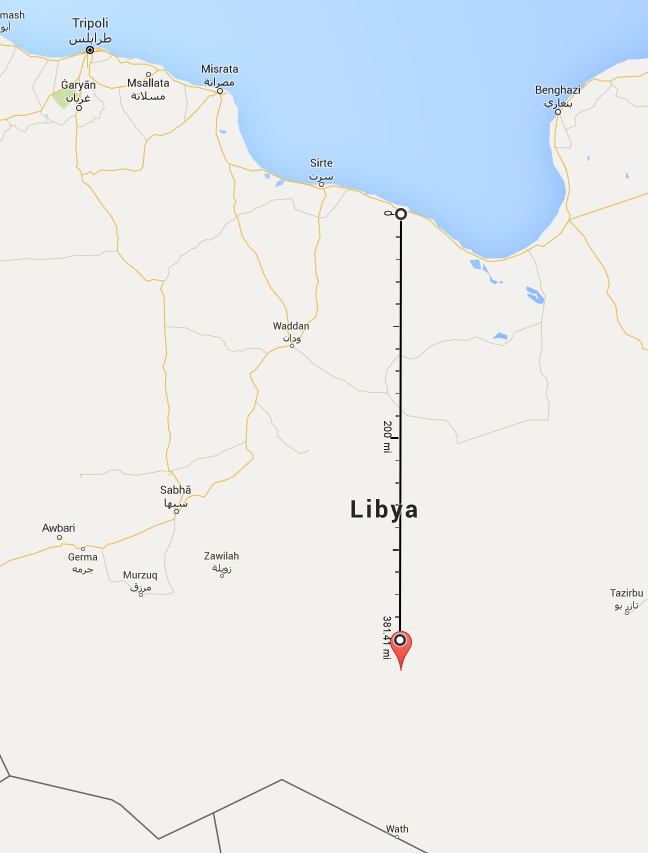 Waw An Namus is located 614 km (381 miles) south of the Mediterranean coast in a bone-dry and extremely isolated area of the Sahara desert. The nearest desert settlement is Wau al Kabir, about 70 miles away. 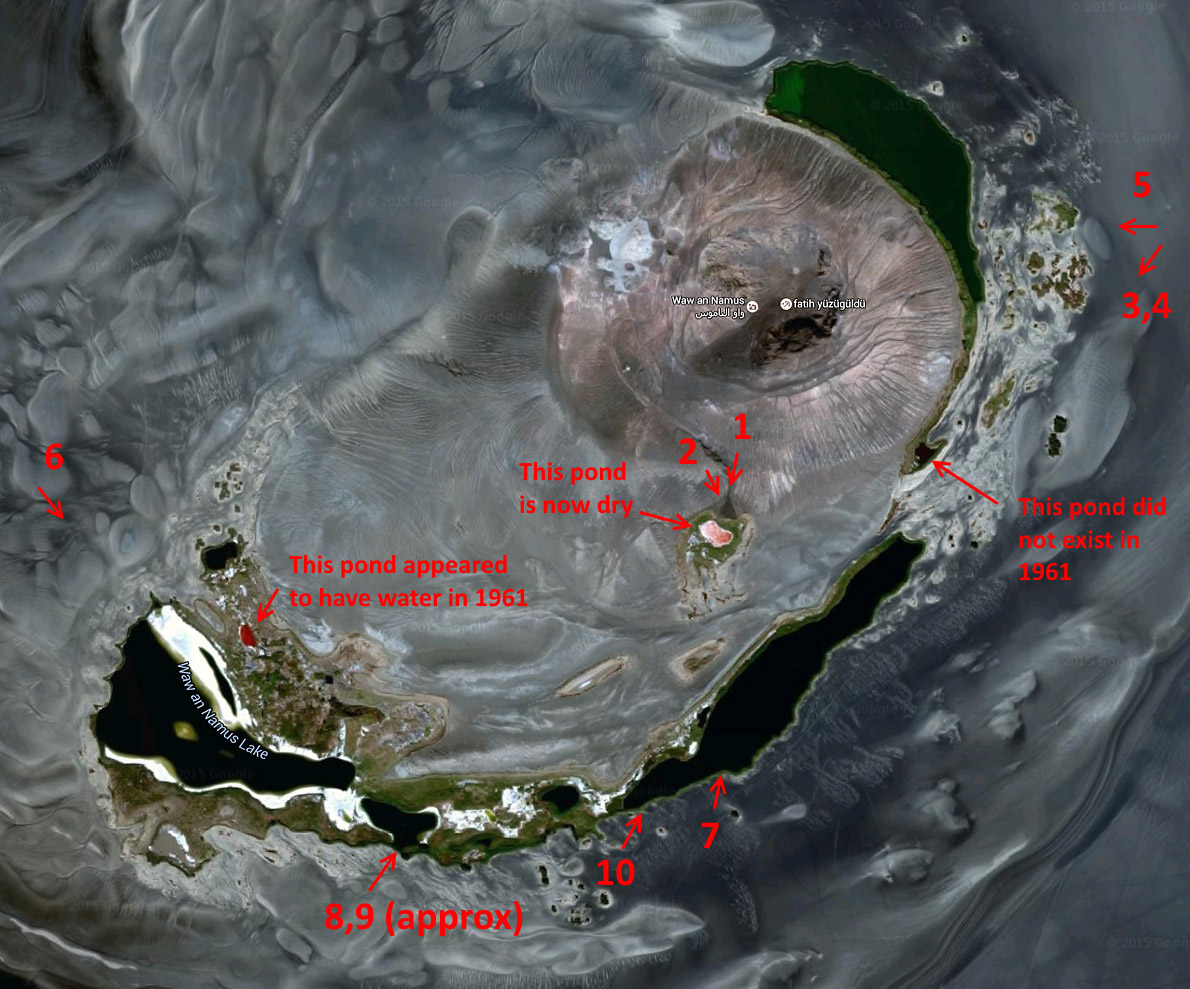 This Google Maps view from September 2013 shows the volcanic crater and numerous ponds. The views in the photographs below are marked. 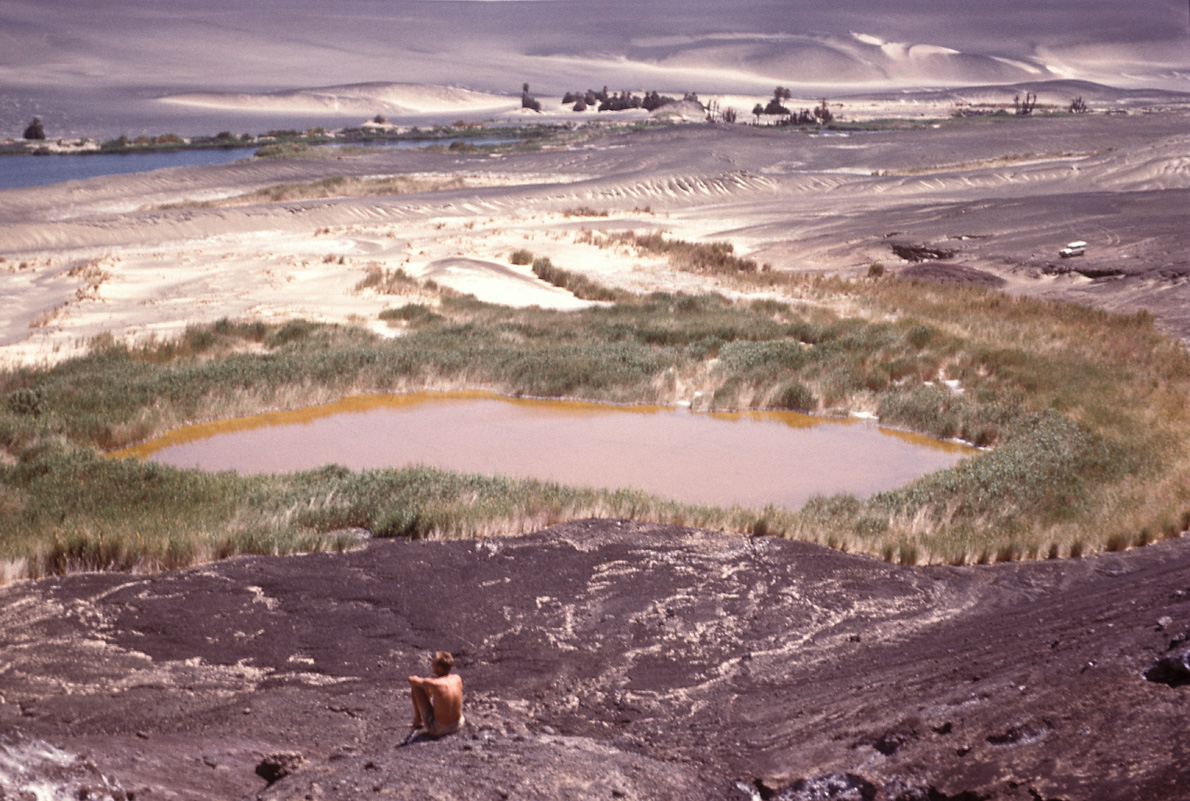 High Resolution (1961) 2. This view is similar to the above image, looking south-southeast showing the now-dry pond in the foreground. 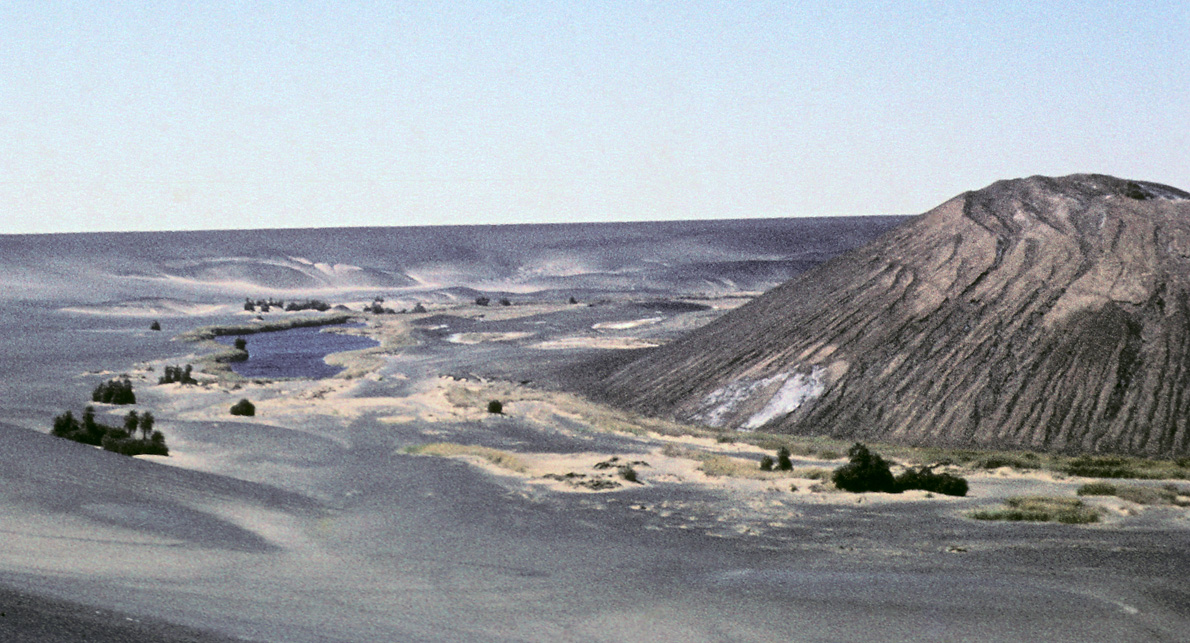 High Resolution (1961) 3. This view looks southwest. If you imagine a line from the white spot on the side of the mountain to the tip of the lake, about halfway along the line there now exists a pond which did not exist when this photo was taken in 1961. (The colors on this image may not be accurate.) 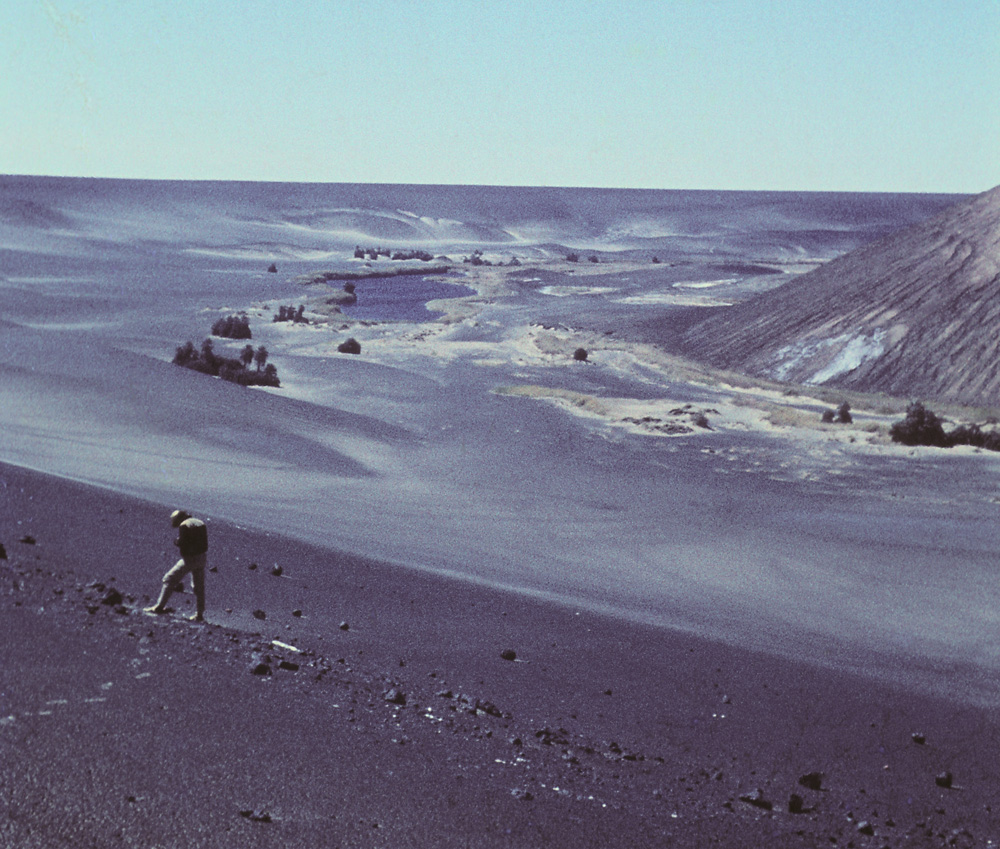 High Resolution (1961) 4. Another view looking southwest, showing the area with the newly-formed pond. (The colors on this image may not be accurate.)

High Resolution (1961) 5. This view looks west, showing the volcanic cone and the large pond on the east side of the mountain. 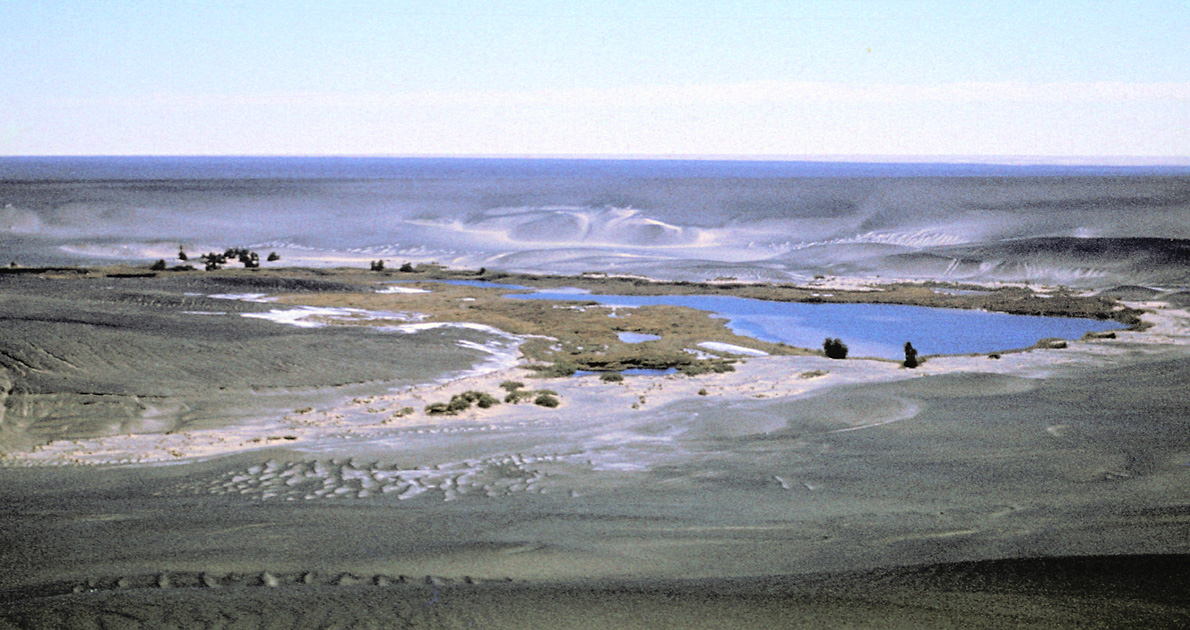 High Resolution (1961) 6. This view looks southeast, showing the westmost pond in the chain of ponds. There are two small ponds on the left side of the large pond. The small pond further away appears to have water in this view. In recent aerial photos it looks like it is dry and covered with orange sediment. 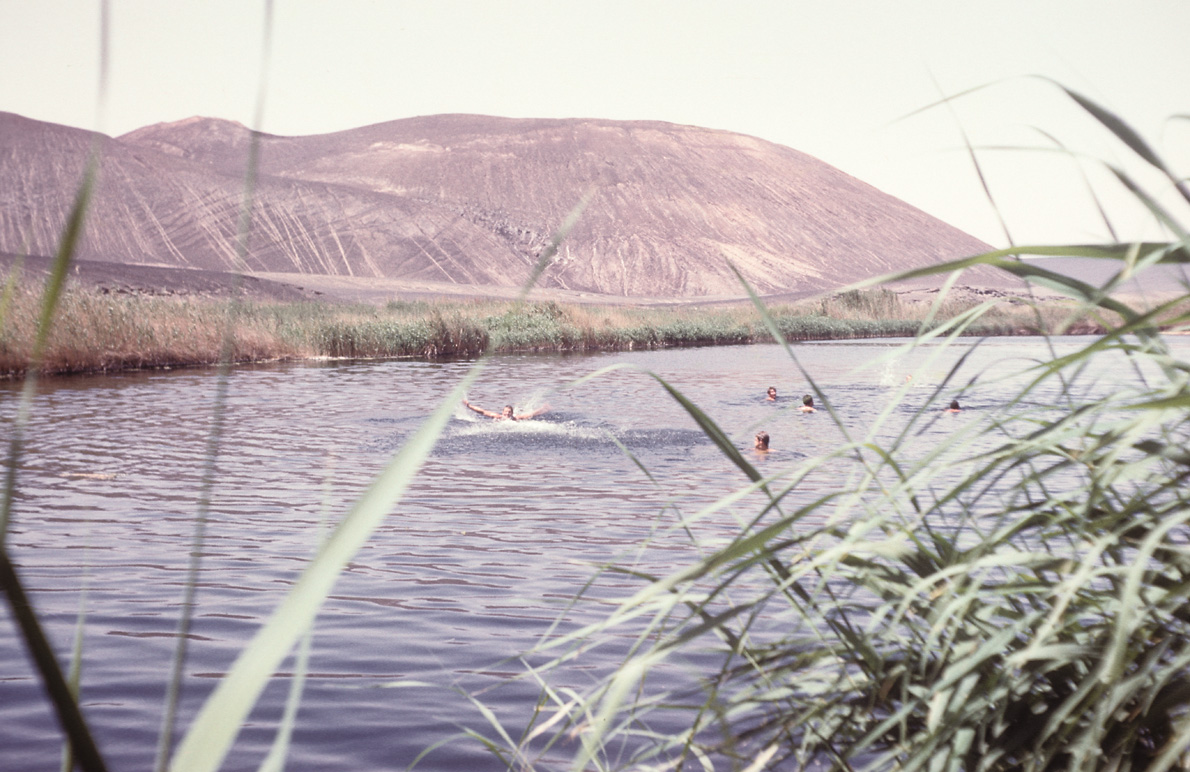 (1961) 7. This view shows several German employees of Prakla swimming in the pond. 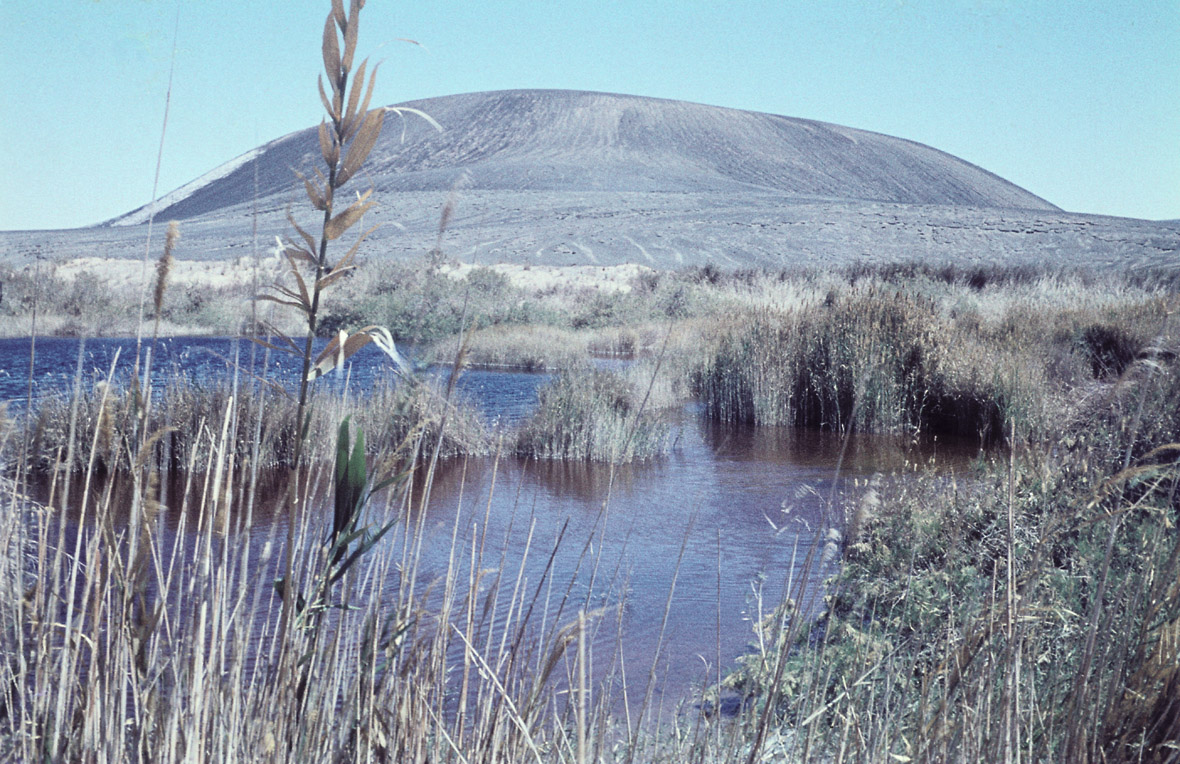 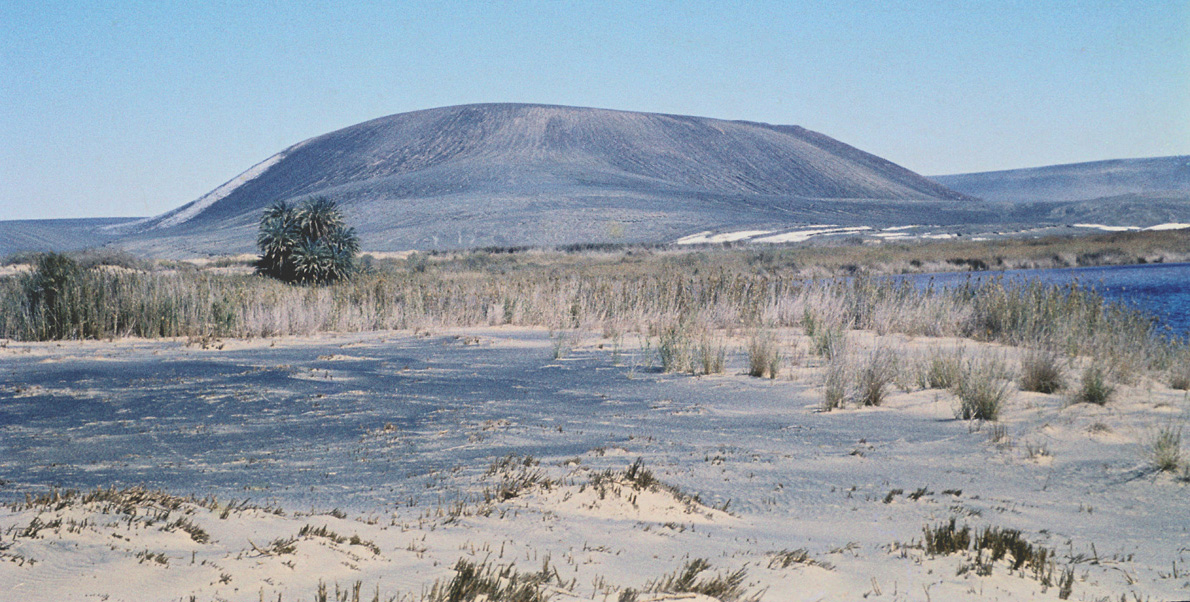 (1961) 9. View at the pond level, showing some palm trees in the background. There is a minimal presence of palm trees at this oasis. 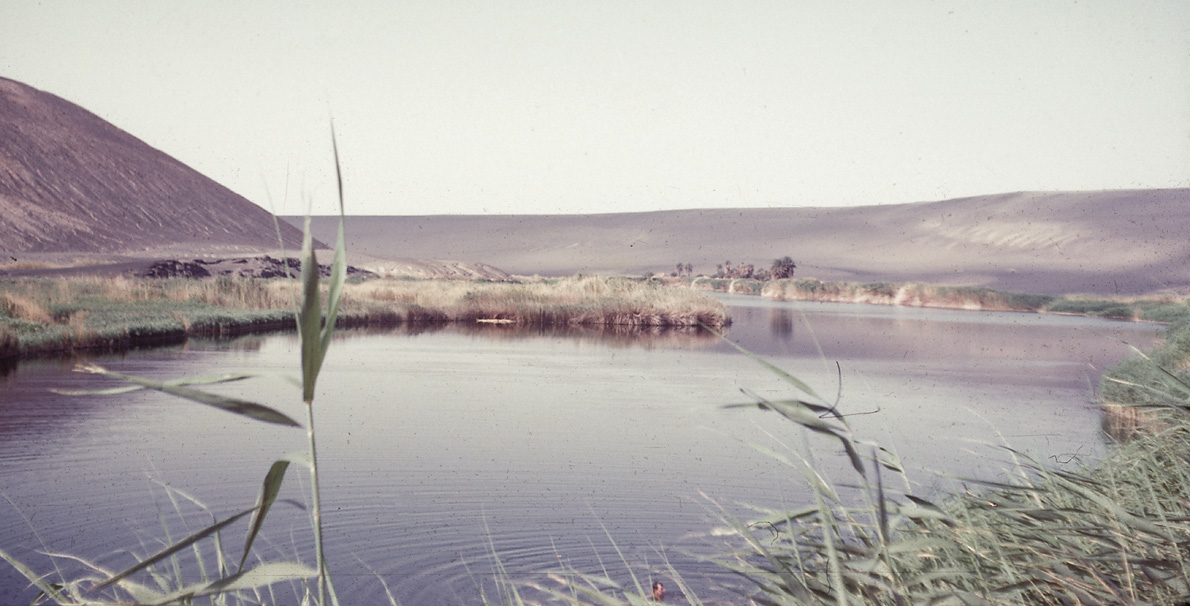 High Resolution (1961) 10. This view looks northeast along the middle of the three ponds, with the volcanic peak on the left.